Wedding of the Weddings 2013 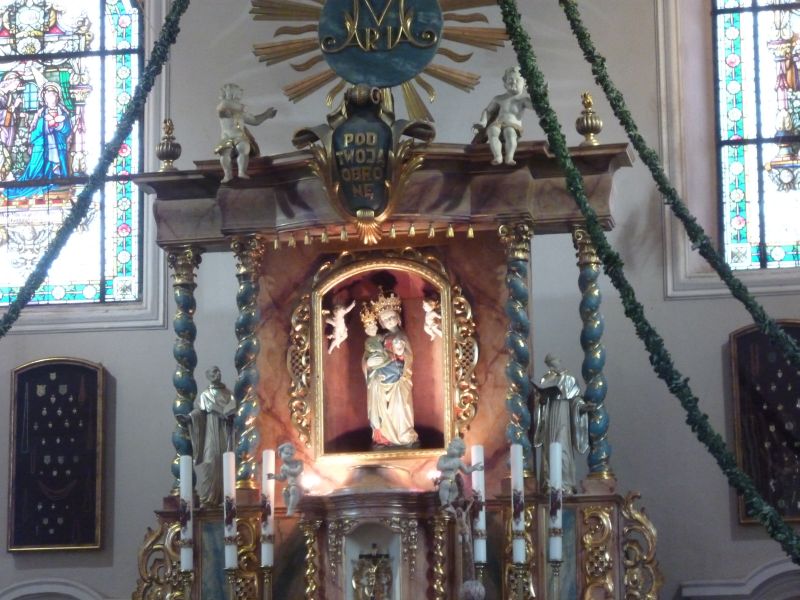 Wieleń Zaobrzański is a small village on the bank of Marian Lake in western Poland. It lies between Poznań in the east and Świebodzin in the west, Wolsztyn in the north and Leszno in the south. It is crossed by the Convallarian kayak waterway (so named after an island that is covered with countless Convallarias). Cyclists are here to be found on numerous bike paths that travel through the beautiful forests of the local landscape parks. The main attraction of the village is the Sanctuary of the Wielener Mother of God - Refuge of Sinners. Mother of God is venerated here since the 14th Century. The church was built by the Cistercians, but that were driven away by robbers from Silesia. The local Provost together with the local council have invited the Wedding of Weddings to a pilgrimage to the Wielener sanctuary.

In a number of dimensions this was the greatest event in the whole series of the meetings. A górale orchestra accompanied us over four days (earlier it came only for one afternoon). So a quite large number of people was attracted by its performance and indirectly the interest in the non alcoholic weddings grew. We participated in celebrities of Our Lady Visitation feast that was itself attended by numerous pilgrims (dozens of thousands each day) so that the speeches of the spiritual leader of the meeting, Father Zazel, could be heard daily by far larger number of people than usually. We had non typical starting hour of the wedding reception, 6 PM. This made the dancing party the longest so far. And we had non typical possibilities to spend the leisure time by swimming, biking, surfing, kayaking etc.

And the most important thing is the unexpected positive reaction to these speeches by the people. Right on the first day of the meeting Monsignor Zązel, Honorary Chaplain of His Holiness, addressed the firemen that had their pilgrimage to Our Lady of Wielen, called Escape of the Sinners. He managed to convince them that a fireman should be sober 24 hours a day seven days in a week. The firemen cheered upon this request.

As surprising and as joyful this fact may be, it was still nothing compared to what happened two days later. Monsignor Zązel after a brief speech asked who of the pilgrims would like to have a non alcoholic wedding. Thousands raised their hands. Nobody of us attending the meeting of couples that had non alcoholic weddings would ever expect that we would be surrounded by so many fans of nonalcoholic weddings. This was a great day for us. But not ony for us but also for whole Poland. We have to acknowledge that we did not achieve this by our own power. It was a miraculous intervention of the Holy Ghost.

There were many more intriguing events. For example the press conference. The participants had so much to say that one and a half hour was insufficient to let everybody say something. At the same time the journalists were totally surprised by our point of view on the perspectives of a sober Poland.

We had also the possibilities to learn much. Though the preachers and lecturers were somehow invited independently, they provided us with a consistent multi-facial view of our faith. We had two lecturers, professors from the Poznań Universities. (Father extraordinary professor Dr. Habil. Jacek Hadryś, Dean of Theological Faculty of Adam Mickiewicz University in Poznań and extraordinary professor Dr. Habil. Andrzej Urbaniak from Computer Science Department of Poznań University of Technology and Papal Theological University). Every other day a different preacher during the Holy Mass. At the remaining Masses speeches were given by a bishop (Józef Zawitkowski from Łowicz) and an archbishop (Stanisław Gądecki of Poznań). Still another bishop (Antoni Pacyfik Dydycz of Drohiczyn) came to deliver a short lecture on the general situation of families. The hosting provost (Rev. Canonicus Marian Szymański) gave us several interesting speeches. And last not least the aforementioned Monsignor Zązel gave us many interesting insights into the culture of górale, its close relationship to our faith and reflected on the wisdom of those who do not drink alcohol and inculturate the sober lifestyle. He recalls that an alcoholic wedding is something for beggars. And his own father advised him: "Do not follow the example of beggars (paupers). Even if everyone around you drinks, you shall not drink."

Why does the most sober nation in Europe organize such events that popularize the culture of sobriety and sober lifestyle?

The answer is certainly not easy, because it just requires a versatile and multi-faceted explanation.

First you have to try to explain why Poland are the most sober nation in Europe.

Above all, it must be said that Poland was a sober nation, although not always so. One needs only to recall the Battle of Grunwald, which brought the Polish state the position of world power. The Americans have their Boston Tea Party, when they threw the British tea into the sea, and the Poles have their Grunwalder wine party when they poured the German wine in the lake.

After the Grunwald victory Poland cared for law and order in Europe for almost 300 years. Poland had defined a new world order based on the Catholic faith during the Council of Constance. But unfortunately the German schismatic and drunkard Martin Luther infected with his heresy also significant parts of the Polish nobility. This brought change of habits, especially the oppression of the peasants and drunkenness. And so the former great power became prey to the occupying powers.

But many Poles were not blind and have understood it correctly, what was the reason of this change. And so we worked to strengthen the Catholic faith and therefore also on the restoration of sober habits. The work of a single priest, Alojzy Ficek, made 300 Vodka maker bankrupt. After regaining independence, alcohol consumption dropped to just 0.7 liters per capita.

But the Second World War was a moral disaster. The Germans killed almost all the leaders of the abstinent organizations. After the war, the Communists arrested anyone who wanted to start a abstinent organizations. Then the Polish bishops decided that all Catholics should have non-alcoholic weddings. But the media monopoly of the Communists made it impossible that one learns about it. And yet the orthodox Catholics have celebrated by themselves more often such weddings.

Today Poland has become the most sober nation in Europe, with the lowest consumption of alcohol per capita and with the largest proportion of abstainers. But from the short story, we learn that once-won position is not given forever. One must always educate the subsequent generations, particularly because enemies of the Church and of Poland run subversive activities by continually attacking the faith and sobriety. Not for nothing free beer is given away to the students.

Second, the position of the best in Europe is no reason for complacency. Europe is by far the drunkard continent in the world. In Poland only 33% of adults are committed to abstinence, while in the world there are 45% on average, and the most sober regions exceed 90%. Much effort is still needed to get to world class level.

And thirdly, it is important to make Poland's achievements in the field of sobriety visible to the whole world. The reason? The numerous campaigns of lies against Poland are just based on libel that Poland is a drunk country. One spreads these lies in order to justify the murder of 12 million Poles during the Second World War with the embezzlement that we are a worthless or at least inferior people, so that eradication of such a nation was not a crime. This is also done to make believable the lie of "Polish concentration camps".

Finally, for centuries, or even millennia, we are witnessing in Europe a continuing struggle between the robbers-and-drunkards-culture and the labor-and-prayer- culture. The mentioned Cistercians were just those who lived by the work with their own hands, cultivated the fields and prayed. The robbers, who were always drunkhards, forced them to leave. But in the fields of Grunwald the water-drinker labor-and-prayer-culture prevailed. It also does matter which one from these cultures wins, since only the labor-and-prayer- culture is sustainable, therefore it guarantees the possibility of peaceful coexistence between people of our continent. But the robbers-and-drunkards-culture is not viable by itself, it is a parasitic culture that is constantly generating exploitation and war.

Therefore, participation in the Wedding of the Weddings is a great honor and the support for the event is a historical duty. We are grateful to the organizers, bishops, priests, preachers, lecturers, guides, sponsors and donators, all the people working so that we could enjoy these four days of celebrations. Last not least to all the couples that came here with their children to create an atmosphere of joy and hope for the future. We are looking forward to meet everybody next year.