5thPolish National Meeting of Couples Who Had Non-Alcoholic Wedding Celebrations

Wedding of the Weddings 1999 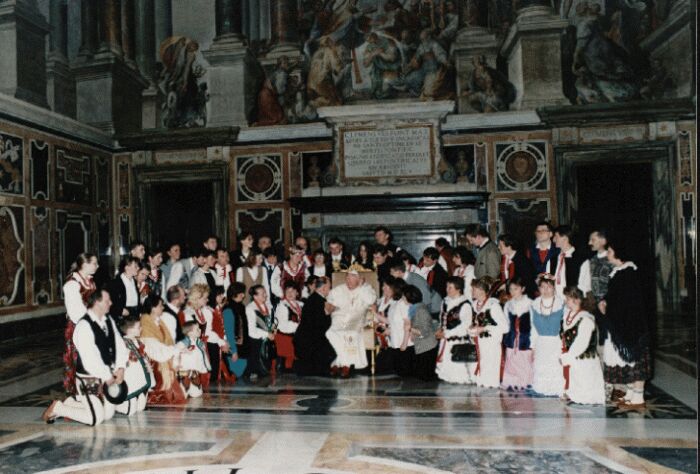 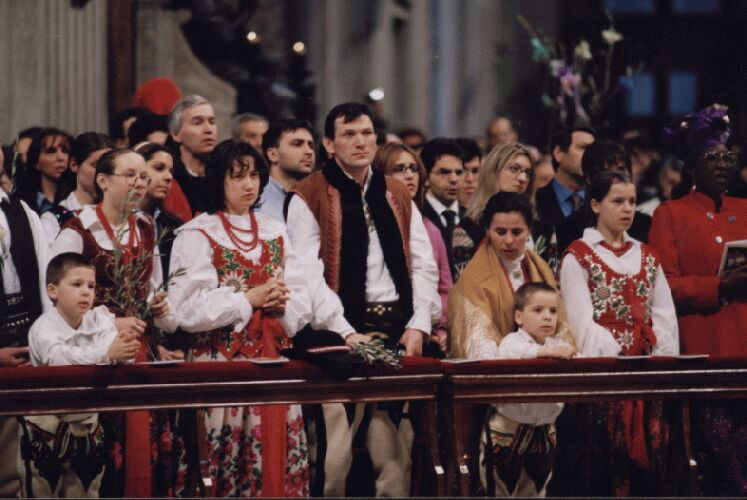 The fifth meeting was a two-part event - in Rome and Stary Sącz. Stary Sącz (called also (called Bryjowo) is a city of about 9,000 residents in the Małopolska province (formerly nowosądecki voivodship), which was chartered as early as the thirteenth century. It lies on the flat bottom of the Sadecka Valley, at the confluence of the Dunajec and Poprad rivers at an altitude of 320 m above sea level. The local monastery was founded by Princess Kinga, wife of Boleslaw the Chaste.

This place was visited by the Pope John Paul II who canonized a saint in the celebrated Kinga on 16 June 1999 Mass. An altar built for this occasion can be still seen there. Participants of the Wedding of the Weddings attended this Mass, located in a special section close to the altar.

But first, Wedding of the Weddings was in Rome - the ancient capital of Christianity. The monumental basilica St. Peter the Apostle, and the doors of the Apostolic Palace. Place of majestic beauty, but hiding memory of martyrdom of many Christians. The visit to Rome had a culmination in terms of the most beautiful audience with Pope John Paul II at the Vatican.

The dream of every Pole is a meeting with the Holy Father. This dream was also in our hearts. But this was next to unreal ... How big surprise came over us when all of a sudden, thanks to Fr. Władysław we could go to Rome. It was the Feast of the Annunciation 25 March 1999. Later, Palm Sunday 28 March and solemn Mass in Saint Peter's Basilica. Peter. Everyone dreamed of, but no one dared to speak out ... Will you succeed?

Father Wladyslaw disappeared, after a long wait for such a simple gesture he reached into the inside pocket of his jacket and said, "I have"! There were tickets for a private audience ... In the eyes pearls of tears .. . Feelings, which no one seems to be able to describe.

The Holy Father was consolidating the idea of Wedding of the weddings with all its teaching and contact with us - after all V "Wedding of the Weddings" was at the Vatican, with the extension by the papal pilgrimage to the Stary Sącz, where we have a special sector close to Human Liberation Crussaide, which came from Kopia Górka and from whole Poland.