16thPolish National Meeting of Couples Who Had Non-Alcoholic Wedding Celebrations

Wedding of the Weddings 2010 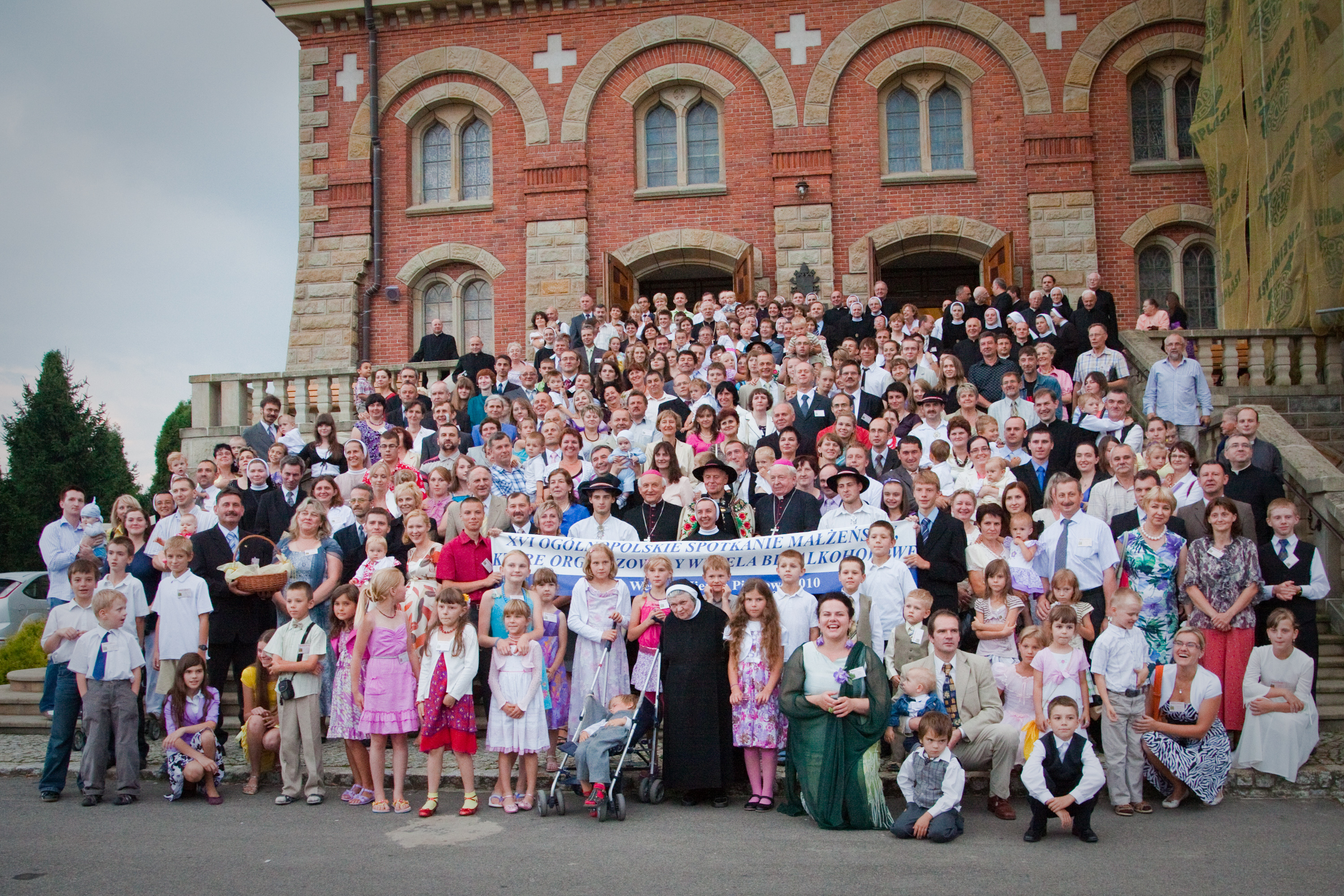 The Wedding of the Weddings 2010 took place in Miejsce Piastowe, in the south-eastern corner of Poland.

Miejsce Piastowe is not only a charming place, with mountain skyline, forests and green fields. It is also attractive spiritually. The name of this village is a clever game of meanings of the words. On the one hand it means the “Place of Care”, and on the other “the Place of first Polish Royal Dynasty”.

The name was invented by the Blessed Father Bronisław Markiewicz. Blessed Bronisław created here a real place of care for orphan, neglected and later poor children (more precisely boys, as co-education was not common in that time). He cared for them, together with the other monks from the monastery founded there, not only by providing with shelter and clothes, but also with education. He educated young people along three directions: for physical work, mental work and spiritual work. Soon not only the youngsters profited from the efforts of Father Bronisław. The profoundly educated craftsmen provided the local community and the province with diverse hand-craft services that were urgently needed and badly lacking in this area. Many boys got sufficiently ripe for university education. All of them along with the local community profited from the religious education. It was a time of grieve poverty. The reason for it was the moral disorder of that time: laziness, heavy drinking, non-marital sex etc. But Blessed Bronisław helped the community to grow into prosperity setting an example not only for Poland. He achieved this improvement in living conditions by showing the merits of keeping God’s commandments for this and future life. The pupils of Father Bronisław learned to work hard, to entertain with playing chess, checkers, reading books, dancing. And, what was most important of all, to live self-constrained, not spending money beyond income, not wasting time nor other resources, not destroying other people’s life etc. The deep religious motivation was the driving force for them.

But the girls were also not ignored. The female monastery of Miesce Piastowe, lead by Mother Anna Kaworek, cared for them in an analogous way, following the example of Father Bronisław.

These famous personalities of the last century provided inspiration for participants of this year Wedding of the Weddings.

Special courses of Good Entertainment for children of the participants were organized by the monks from the Miejsce Piastowe Monastery and Dr. Nogaj from the University of Philosophy and Education "Ignatianum" in Kraków, Poland.

The famous theologian and philosopher Rev. Knabit gave an excellent lecture on Bernadine spirituality, favouring strongly interleaved prayer, creative work, respect for the other human beings and optimism rooted in the faith in God.

The renown human rights activist, Dr. Zięba from the Kraków University of Technology explained the major points in favour of protection of human life from the conception to natural death speaking in the language of engineers and computer scientists: exposing concrete numbers, dates and facts that perfectly denied all the claims of protagonists of abortion. It is not possible to draw correct conclusions if the data were wrong. Therefore he insisted on collecting data in a scientifically rigorous way.

The major Polish expert on the issues of theological underpinning of sobriety, Rev. Zązel, gave several speeches on various aspects of sober life style - not only on its advantages for an individual human being, but also for the closest family and friends, as well as the whole society. Rev. Zązel was the first provost that managed to convince the vast majority of his parishioners in Kamesznica to have non-alcoholic wedding receptions.

The public debates were driven by the insight of Blessed Bronisław that "The state the Nation tomorrow is determined by our effort to bring up youngsters today".

Folk artists and pop music groups cared for unprecedented entertainment. Six folk ensembles and a local orchestra showed the diversity not only of the local folk music, but also dances and clothes.

Six bishops from Poland and abroad accepted invitation as honorary guests of the meeting. The Archbishop Tkacz came from Slovakia. The Archbishop Michalik is the President of the Polish Bishop Conference and at the same time the archbishop of the local diocese of Przemyśl. Bishop Szal came also from Przemyśl. Bishop Górny represented the neighbouring diocese of Rzeszów. Bishop Stefanek, member of the Papal commission on Family, arrived from Łomża. The diocese of Łowicz was represented by the Bishop Zawitkowski, the famous poet and bishop in one person. During a Pontifical Mass they blessed each couple and each family separately. They gave also impressive speeches. Bishop Górny and Bishop Zawitkowski stressed that the couples that had non-alcoholic wedding receptions are currently the only hope for Poland and Europe, and the world. The President of Polish Bishop Conference spoke about the endangered love. The love is manipulated and alienated by a massive offensive attack and therefore the love is dying, and with it the Poland is dying out. Bishop Stefanek criticized the relativism and reductionism that claim that human beings are too stupid to acquire knowledge about the surrounding world. Bishop Szal drew our attention to the attempt of enslaving the people by pushing them into never ending chase for wealth, and pleasures that end up in destroying marriages and capturing into alcoholism. Whereas the real happiness is not related to wealth, but to a family having a good relation to God and his commandments.

And of course, the traditional non-alcoholic wedding reception was held. The grand polonaise started as usually the reception. Life music and professional entertainers created a unique atmosphere. Local cuisine of Podkarpacie region surely pleased every gourmet. The romantic dance with candles was a great joy both for young boys and girls and the married couples of all ages. The non-alcoholic wedding cake at midnight and the greeting wedding bread were a fun both for stomach and the mind.

the wedding reception was attended also by representatives of local authorities who also gave speeches to us in the preceding days presenting the history of the region, the tourist attractions and the overall trends in development and investments in the region.

The four days of the meeting set again an example how a wedding may be organized. Depending on available time and resources one can follow some or many of the ideas of entertainment for wedding guests of all ages. Even the aristocrats of ancient Poland would be proud if they could organize a wedding like this.

we thank all that contributed to this great event.