Wedding of the Weddings 2012 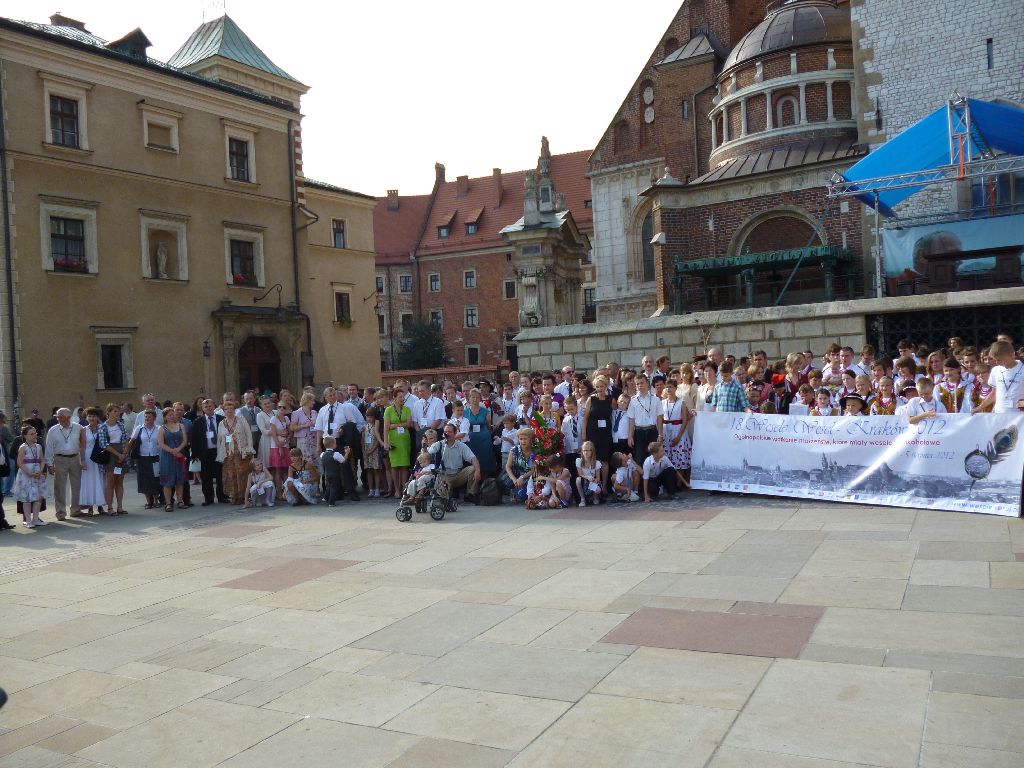 We thank all the couples that celebrated their wedding without alcohol, for attending the 18th Polish National Meeting "Wedding of the Weddings" (in Polish "Wesele Wesel") in Kraków (Poland) on 2.8.-5.8.2012.

The Royal Capital City of Kraków, as the town is called today, was a formal capital of Poland in 1296 - 1795. Even when the kings resided in Warszawa, the crowning ceremony was held here.

The beautiful town lying on the major Polish river Wisła (Vistula) is known for a remarkable number of historical monuments that survived the turbulent Polish history. Just to mention the Royal castle of Wawel, with the famous Wawel cathedral, with graves of many Polish kings, where great personalities are buried till the present day. You can find here a multitude of charming churches carrying to the present day the spiritual treasures of Catholic faith and memories of extraordinary Saints from the Kraków area. Also churches built today deserve a visit. Especially the Łagewniki basilica that reminds us of God's mercy, thanks to the memorials of Saint Faustyna Kowalska.

One should say that the proper name of the city should be "the Abstinent Capital City of Kraków" because it has one distinctive feature among all the biggest cities of Poland. As a recent (2011) opinion pole demonstrated, inhabitants of Kraków differ significantly of those in other big cities in Poland. 16% of Kraków population acknowledge being abstinents from alcohol. They prefer instead walking and family entertainment.

Should this result be surprising? Not at all. Kraków has a long tradition of famous residents that were abstinents.

Over six hundreds years ago the great Polish King and abstinent Władyslaw Jagiełło lived here. He was in his time famous for drinking water and goat milk. He was also the driving force behind the famous Grunwald wine party. The USA has its Boston tea party. A similar role plays the Grunwald wine party. Though there is a difference, because the Boston tea party in fact started a war and the Grunwald wine party was the end of one. The battle of Grunwald of 1410 was one of the biggest battles of Middle Ages in Europe. Two worlds gathered at opposite sides of the battlefield: the Cross Riders supported by armed forced from all over the Western Europe and on the other side the forces of Polish Kingdom with allied states. The total victory of Polish military changed the history of Europe. After the battle Polish forces entered the military camp of the enemy. Germans prepared there large numbers of chains for Polish captives. These were used to chain the Germans. Also large amounts of wine were brought by them to celebrate the envisaged victory. Polish king ordered the wine to be poured into the lake nearby. The smell of sulfur was spreading on the occasion above the lake which was interpreted as a sign of presence of devils. This was the Grunwald wine party.

Therefore, after World War One, as Poland regained independence, a large number of abstinence movements emerged.

One of the abstinent groups in Kraków was headed by Karol Wojtyła, who later became the Pope John Paul II. By the way he was a great supporter of non-alcoholic weddings and even offered his Apostolic blessing on such occasions.

Wedding of the Weddings visited already the historical capital of Poland in 2000. A considerable number of couples from this city and its surroundings celebrated their wedding parties without alcohol, just extending the splendid royal tradition of Grunwald wine party to our time.

So a quarter of thounsand people came to the meeting. The largest group of course from Kraków and the vicinity, but attendees from Warszawa, Poznań, Białystok, Przemyśl and other distant cities, towns and villages were present.

The photography above presents the most spectacular part of the meeting, the end of March of Sobriety from Kraków Old Market to the Hill of Wawel. Thousands of tourists visiting Kraków, including English speaking ones, were wondering what is going on. Everybody was asking, what a non-alcoholic wedding reception is. They were shooting photos of this unusual event.

In fact the parade was unusual. A Górale youngster orchestra, clothed in regional Górale costumes, was followed by wedding guests clothed also in colorful regional costumes, Górale and Krakowiacy ones, as well as gentlemen in suits and ladies in long evening dresses. The parade first entered the historical market square in the center of of Old Town and approached the St. Mary Church. After visiting the church and prayers for he well-being of the Nation the parade headed along the Royal Route towards the Royal Castle on the Wawel Hill. In the Royal Cathedral there the Archbishop of Kraków, Stanisław Cardinal Dziwisz was reading the Holy Mass. Thereafter he blessed each family separately. After the Mass at the graves of Polish Kings, bishops, presidents and other distinguished leaders the parade returned downhills to the buses to go to the Open Source restaurant (a beautiful name for software engineers) to celebrate the Non-alcoholic Wedding Reception.

At the reception site the participants were welcome by the wedding steward who treated everybody with bread, baked specially for that occasion (large enough to feed everybody, with an inscription "Wedding of the Weddings". Thereafter we had a dinner. After the dinner we were invited to a "family photography". Then the traditional Polish aristocratic dance followed: the Polonaise. Polonaise is a slow dance of Polish origin, in 3/4 time. It is a kind of walking dance where first the pairs queue in a long line that goes then through the floor making diverse "figures". The queue forms a circle, then the circle is split into two. Thereafter both circles are joined to form one circle with fours instead of pairs and so on.

The dancing lasted till 5AM next morning. Waltz, Krakowiak, Belgian and lednicjan dances as well as modern dances were on the agenda.

The Krakowiak is a fast, syncopated Polish dance in duple time from the region of Kraków and Małopolska. From a folk dance it became a popular ballroom dance over time. Not all wedding guests knew this and other dances. But no problem. The wedding dance manager (wodzirej) was instructing and providing training so that everybody could enjoy the party.

The meeting had a world-wide coverage. The events were transmitted live (including the reception) by an internet television station. A couple of newspapers sent their journalists to get interviews with the participants. The usual questions were asked: why non-alcoholic wedding? This question is absolutely wrong. One should rather ask why there are people making alcoholic wedding when the alcohol spoils the taste of food, disturbs dancing and disables conversation.

Of course the non-alcoholic wedding reception was not the only point of the programme. We visited Łagiewniki sanctuaries of God's Mercy and of the Blessed John Paul the Second and well as the church in Mistrzejowice in the Nowa Huta district of Kraków where dozens of years ago a fierce fight of atheists against Polish Catholics took place. We prayed at the graves of two provosts of the church who are now servants of God (candidates for sainthood) due to their martyrdom life.

A couple of very interesting lectures were on the programme too. One was dealing with the matrimonial love as the foundation o well-being of children. A divorce is a more traumatic event for a child than the death of its parents, as the lecturers revealed. Another lecture was devoted to the importance of premarital purity for the happy marriage (it was addressed to the children of the couples). We had also a lecture on the activities of the devil in the present days and on the need for internal healing.

A modern religious music concert was performed for us at the Łagiewniki conference center.

Every day a Hole Mass was celebrated for the participants. In Mistrzejowice by bishop Grzegorz Ryś, in Łagiewniki by priest Mirosław Żak, in Wawel by the Cardinal Dziwisz and again in Mistrzejowice by the prelate Władyslaw Zązel. Different aspects of the importance of non-alcoholic weddings were stressed in their preaches. On the one hand it is bringing the message of Evangelium close to the daily life. Another is a kind of a rescue operation, an arch to save at least part of the people from the foods of alcohol. Still another issue is to save the institution of marriage in a time when it becomes obvious that without protecting it the society turns into a band of criminals. Last not least it is to save the Church.

We are deeply thankful to all those that contributed to that great festivity that enabled us to spend four joyful days and to learn so much for our future life.