Wedding of the Weddings 2014 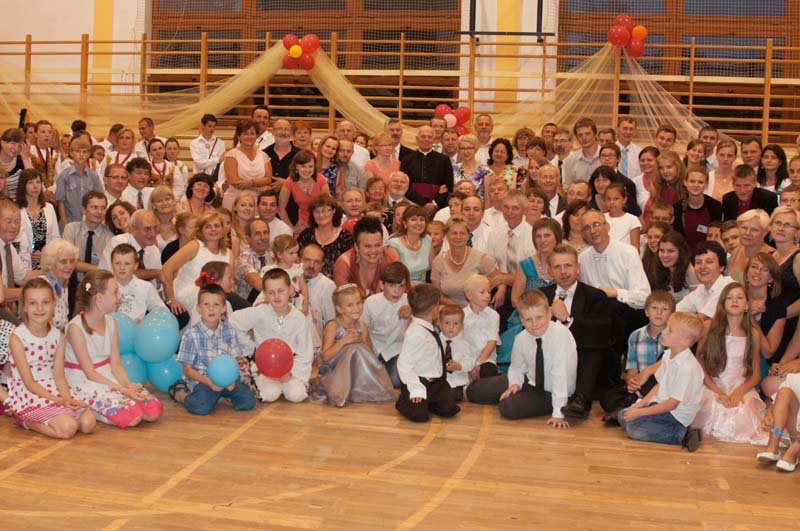 The 20th Wedding of the Weddings was celebrated in Kamesznica, the most sober village of Poland, the most sober country of Europe. In the village of 3,000 inhabitants, there were 40,000 participants of non-alcoholic wedding receptions over the last 30 years. The Meeting was organized by the Association Wedding of the Weddings and several abstainer organizations from Kamesznica, under the leadership of the Provest of Kamesznica, Msgn. Władysław Zązel.

On Thursday, July 31, 2014, upon arrival, we prayed the Chaplet of Divine Mercy. Thereafter we walked to the neoclassical Potocki mansion (built in 1833), surrounded by a park in the English style.

In the evening Bishop Peter Greger, suffragan of Bielsko-Biała-Żywiec read a Pontifical Mass officially staring Wedding of the Weddings 2014. He welcomed us with the words "You are the apostles of sobriety in the modern world. Let your testimony be an encouragement to others that one can and should live in sobriety".

After the Mass Rev. Dr. Wojciech Ignasiak had a short lecture on fostering culture of sobriety by the Rev.-F.- Blachnicki-Centre of Prevention and Training. Then we danced the so-called Lednica-dances under the guidance of Hojnowie Brothers and Friends.

After supper there was a time to get acquainted with the historical monuments of the region. A talk on the subject with a slideshow was given by M.Sc. Katarzyna Śleziak

The next day, Friday, August 1, 2014, started with a Pontifical Mass, read by Bishop Tadeusz Bronakowski, suffragan of Łomża, Chairman Commission of of the Conference of the Polish Episcopate on Apostolate of Sobriety, Honorary Member of the Wedding-of-the-Weddings-Association. He thanked us for our testimony of abstinence on the most beautiful day of life, at the day of the sacrament of marriage. "Resignation from alcohol can not be regarded as oddities. Teetotaler is a man who looks a lot further and see smore. Teetotalers are wise people, responsible, reigning over their lives" he said. The Episcopate of Poland distinguished the Wedding-of-the-Weddings-Association with the Saint-John-the-Baptist Sobriety Statuette. The standard of the Association was hallowed by the Bishop. A second Saint-John-the-Baptist Sobriety Statuette was granted by the Polish Bishop Conference personally to the Msgn. Władysław Zązel for his extraordinary achievements in speading the sober style of life in Poland.

After the Holy Mass we attended a Conference "Life as a gift" by Msgr. Dr. Francis Płonka, director of the Diocesan House of the Virgin and Child in Bielsko-Biała. Then the next Conference "Risks of modern addiction of children and young people and the way out to freedom" was given by Fr. can. MA lic. Józef Walusiak, founder of the Foundation "Hope", the chaplain of the Catholic Centre for Education and Therapy of Youth "Hope".

Fr. Dr. Marcin Kołodziej, defender of the marriage bond in the Metropolitan Court of Clerics in Wroclaw and a member of the Liturgical Commission of the Archdiocese of Wroclaw. lectured on "Is the faith needs of the liturgy?".

After lunch we prayed the Chaplet of Divine Mercy. Afterwards we went by busses to Mount Matyska to pray on the Way of the Cross, under the guidance of Msgr. Władysław Zązel, Member of the Polish Episcopal Conference Commission of the Apostolate of Sobriety and the founder of the Wedding-of-the-Wedding-Movement.

After the supper we had elections at the General Assembly of the Association.

Saturday, August 2, 2014, started with Conference "Family is the most important" by M.Sc. Małgorzata and Dr. Henryk Jarosiewiczowie, psychologists (specialization: characterology, clinical psychology, psychology of management), researchers at the University of Wroclaw and the Institute of Characterology and founder of the Academy of Sciences of Upbringing.

The next conferernce was given by Krzysztof Brzózka, Director of the State Agency for Solving Alcohol Problems (PARPA) on the topic: "Why talk about sobriety from the point of view of public health" -

The evening started with a Holy Mass with renewal of marriage vows. It was read by Father Leon Knabit OSB. Then the participants followed the Skomielna Black Orchestra to the local primary school to take part in the Non-alcoholic wedding reception, lead by bellwether Rafal Folwarski. We danced till 4 o'clock in the morning.

Thereafter Skomielna Black Orchestra concerted. Afterwards we had the occasion to see a theatrical performance by artists from Skomielna White. At the end participations diplomas were handed out.

We thank for this great event to the Organizers: Sobriety Association - Club "Grapka" and Wedding-of-the-Wedding- Association and the Name-of-the-Blessed-Virgin-Mary Roman Catholic Church Parish in Kamesznica. And especially to the meeting coordinator Mrs. Irena Pietras (Association of Sobriety - Club "Grapka")

See a slideshow of this year Wedding of the Weddings celebrations.